Jelly Is In The House! 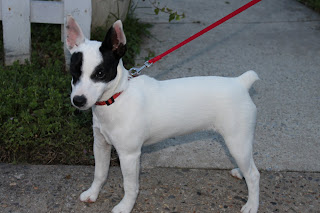 Meet Jelly!
Well, folks, it happened, I wore La Principessa down and when I wear someone down I do a very good job!
You see, I've been wanting a dog for years- ever since we lost our dear David Doggie under sad circumstances in 1998- but by the time that we were free from our difficult situation and able to have a dog again we no longer had a home of our own.
Because the loss of David(and our cat, Lulu!) was
so hurtful I vowed to never have a pet that we might not be able to keep forever.
Cats are easy, a litter box, lots of petting and a big window- you've given them cat heaven.
Dogs- well, what if you need to move(or are temporarily homeless?) and the landlord says "no dogs"?
I couldn't chance it.

Then we acquired the Coop!
We had a home, a house of our own!
Nothing can take that from us- we're safe from landlords and the vagaries of other people's hearts now.
We can have a dog and know that we will always have a home for the dear thing.

So, I began my campaign.
At first La Principessa was afraid to think about a dog- she was affected in a serious manner by the loss of our pets way back when, although our dear Lilly has eased the hurt considerably over the past decade.
Her first decree was that we could have a dog if it cost less than 50 dollars.
We went to shelters a lot over the first few months that we owned the Coop; I was determined to find a dog that would break down her resistance.
Unfortunate for us, the county we live in seems to receive predominantly Dobermans, Pit Bulls and the ubiquitous"mix" that is really a Pit Bull under the witness protection program.
La Principessa was having none of them- they made her feel unsteady- so she said "NO, NO, & NO" many times.
But I didn't give up.
I got us the Coop, didn't I?
I am still fighting the lymphoma and still on my own feet, aren't I?
I can achieve anything, for I'm MOMMY- La Principessa says so all of the time, and who am I to dispute her opine?
We would have a dog.

A few months ago, I was envying a friend's dog on Facebook and my dear daughter chimed in with a post- "You can have a dog if it's free".
WELL, send me a challenge, why don't you?
I began looking on Craigslist and found a few free dogs, all Pit Bulls though- Kiddle said "NO".
Was she backing out on her word? Hmmph.

Last Friday Kiddle was contacted by an Amazon client who is a dog breeder - would we like her book collection?
She is moving to a farm in upstate NY and lightening her load.
Um, yes, we would, thank you very much and by the way Mommy has been campaigning for a dog but Kiddle's decree is it must be a free dog and all we have found so far are Pit Bulls.
Well, they chatted and we went to pick up the books in the late afternoon, and our client(and now FRIEND!) GAVE Mommy  an amazing, cute, adorable, delicious, frisky puppy, a five month old Rat Terrier!
The name on her papers is Snow Bunny, but we have renamed her-
Jelly! 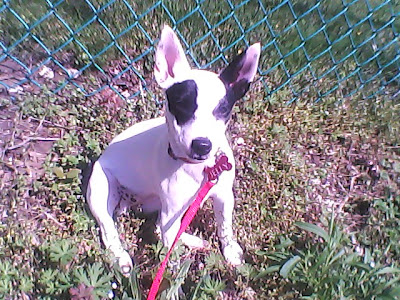