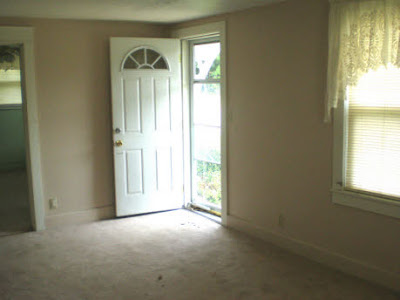 When we first saw the interior of Cape Coop, we were stunned to find carpet in the front rooms of the first floor. Weirdly thick and squishy carpet it was, too. La Principessa announced that she could not abide to walk on such a surface. The stairwell and stairs were also covered. After falling in love with Cape Coop and it's price online, La Principessa suddenly balked at buying the chicken house. This is a lass who has had to view one of our previous homes by entering through a window, only to find a tub full of excrement in the solitary bath, and still beseeched Mommy to "take this one, it's homey!".
I had, up until this moment, been unsure about her desire for this house- it was so far from the hospital where I need to be seen weekly in NYC, it would take every penny that we had to purchase! But, something hit me, right then. I watched her run through the rest of the tiny house and I knew that she wanted it. My Kiddle so wanted to feel safe, and we had a long journey to get to that shore. I walked to the southern wall of the living room, laid down my cane, grabbed at a corner of the carpet- and PULLED. There was a firmly and thoroughly stapled down layer of rebond pad underneath. I tore at it, and pulled a bit more. A lovely shade of honey glowed beneath my stare. Kiddle was entranced. Wood- she dreams of wood floors that she's played on in years past. The house was a GO, once again. Never mind that the floor was uneven under most of the carpet, and there may be a gaping plywood hole hidden somewhere under the camel hair floor. This could be homey. This could be HOME.
at 8/18/2009 08:45:00 AM